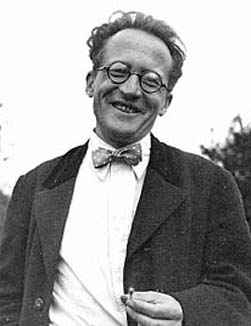 Dr. Christian Joas will speak at the Colloquium in Logic, Philosophy of Science and Philosophy

Erwin Schrödinger's position in the interpretational debates surrounding quantum mechanics has traditionally been viewed as displaying a realist attitude towards theory. Wessels, Bitbol, and de Regt have shown that Schrödinger's position was more complex and ultimately grounded in a Boltzmannian tradition: Like Boltzmann, Schrödinger was not a naive realist, but had a sophisticated understanding of the role of models in physical theory which informed his methodology of physics. I argue that understanding Schrödinger's methodology is crucial to understanding not only his stance on the interpretation of quantum mechanics, but also more generally his creative work in the development of new theories. I will illustrate this by examining an ambitious theory of solids that Schrödinger advanced in one of his first theoretical papers, his development of wave mechanics, and his attempts at applying wave mechanics beyond the hydrogen atom that led him to early insights into entanglement. Schrödinger's position in the interpretational debate did not stem from metaphysical prejudice, but was deeply rooted in his theoretical practice.